This is the weapon assigned to all Sandmen in the City of Domes. It is always referred to as “The Gun”. Only Sandmen are authorized to carry them.

The Gun can fire several kinds of ammunition. It normally carries 4 shots of each type. Switching between types of ammunition is a complex process and requires training. Non-Sandmen can fire the weapon, but in order to change ammo types or determine how much ammunition is left, the user will have to figure out how to use the gun as if it were Underdweller technology. (50% + 5% per level for astronauts, %10 +5% per level for Chimpanzee Scholars)

If a untrained user fires the Gun, the AM can randomly determine what kind of ammunition is used.

Ammunition for this weapon can only be found at Sandman facilities within the City.

(Normally 4 of each per Gun)

Homer: Homer rounds are self-guiding projectiles that can automatically target a human’s body heat. They have a +3 against any human target, and a -3 against any other living creature (apes included). Light and Moderate cover will have no effect on human targets.  They will do 1d10 damage and target must Save vs. Energy or get an additional 1d10 damage to the target’s nervous system.

If the target is close to another human (if they’re grappling for example), there is a 50% chance the homer will hit the other target.

Rippers: A cloud of fletchettes – treat as shotgun. A trained user can change the range that maximum damage (3d6) occurs at.

Tanglers: This is similar to, but less powerful than the Underdweller webguns. It releases a cloud of plastic strands to ensnare the target. Armor will have no effect. Target must make a save vs. energy to resist or be unable to move for 1d6 turns.

The Gun is obviously a powerful weapon. AMs have the option of making the Gun only usable by Sandmen. They will explode (3d6 damage to user) if anyone other than a  registered Sandman tries to fire it.

The City of Domes is defended, and it’s laws are enforced, by the elite Sandmen. I’ve provided stats to treat them as creatures, or as a playable class.

Sandman (as a Class)

The AM can modify this roll for any unusual circumstances.

Wilderness Tracking
More experienced and trusted Sandmen are allowed to leave the City to track runners. The base chance is 20% +5 percent per level. Outside the city the palm-flowers cannot be tracked.

The Gun
The Sandmen are issued a special weapon commonly called “The Gun“. It fires several kinds of specialty ammunition. Sandmen are trained to use these weapons.

Armor
The black uniforms of the Sandmen are similar to Underdweller silksteel. They will provide a -2 Attack Modifier

Sandmen (as an Encounter) 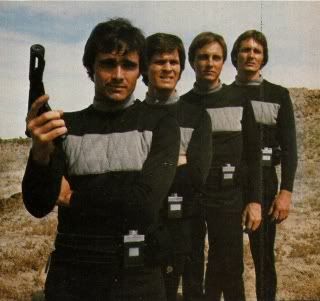 Ability Adjustments: None
Prime Requisite: DEX
Hit Dice: 1d6
Maximum Level: 4 (normally)
Attack As: Astronaut
Save As: Astronaut
Runners may use any weapons and armor.

Runners are citizens of the City of Domes who decide to ignore the laws of the city and try to survive past the age of 21. There is a informal resistance within the city that helps the runners.

All citizens are identified with a first name and a number (Ex. Doyle-7, Kara-10). There are no surnames.

Palm-Flower: All citizens have a flower shaped crystal in the palm of their right hand.The color of the crystal indicated the citizen’s age. The crystal changes color every seven years.  It starts at yellow. It turns blue at age 7, then red at age 14.  On their LastDay (the day before their 21st birthday), it starts blinking black & red. The day a runner turns 21, it turns black.

Move Silently and Hide in Shadows
(As Bonobo)

City Knowledge
Runners will have common knowledge of all institutions and technologies within the city. Everything outside the city is unknown to them.

The following are everyday things that any citizen of the City of Domes would be familiar with.

City, The
Also called the City of Domes. The only known population of humans left in the world, The Domes protect the citizens from the Waste outside.

Cubs
Feral packs of children that live in the Shell. They are wild, and considered highly dangerous.

Face Shop
A medical facility where automated machines can make any cosmetic changes can be made to a citizen.

Halucimill
A facility that provides various drugs and libations for recreational use. This is where most citizens socialize.

Haven
A mythical place of peace and safety. It is rumored that other humans survive there, somewhere outside of the City of Domes. The symbol of Haven is a silver Omega pendant.

Homer
A special kind of bullet that Sandmen’s guns can fire. It is attracted to human body heat, and overloads the targets nervous system, causing an agonizing death.

MAXHA (Maximum Happiness Algorithm)
The system. The AI that protects, cares for and loves all citizens.

Palm Flower
Evry citizen has a crystal embedded in their right hand at birth. It changes color every seven years, first yellow (age 0–6), then blue (age 7–13), then red (age 14–20), then blinks red and black on Lastday, and finally turns black at 21

Lastday
The last day before a citizens 21st birthday. By law, they must report to a Sleep Shop for Satisfying Slumber

Runner
Citizens who no longer believe in MAXHA and the laws of the City. They attempt to avoid Lastday and the Sandmen. Some try to flee the city. Some are starting to believe in Haven.

Shell
The domes of the city have multiple layers for safety. There is a maze of scaffolding between them. Packs of wild Cubs live here.

Sandmen
Agents in service of MAXHA. They hunt down all Runners

Waste, The
Anything outside of the city. Most citizens believe the outside is poisonous and uninhabitable.

Deep within the Forbidden Zone, there is a remnant of the pre-apocalypse society. The City of Domes is a technologically advanced human community protected from the world outside by a series of solid, opaque geodesic domes.

The people inside live a life of luxury, with all their needs provided for. They have little knowledge or interest in the world outside. They’ve never heard of or encountered Ape society. There is no government, and all decisions are made by intelligent computer systems.

In order to keep the the population stable, the City sets the maximum human lifespan at 21 years. This is enforced by the City’s armed enforcers – the Sandmen.

Most citizens go along with the society, but a few seek to escape. These rebellious few are called Runners. Sandmen ruthlessly hunt down and kill all known runners.

This is obviously based on Logan’s Run, both the book by William F. Nolan and the 1976 movie.  I’ve used bits of both and added some stuff of my own as well.

The City of Domes can serve as both an adventuring location  for players exploring the Forbidden Zone, or as a source for new players – either Runners or disaffected Sandmen.

I’ll be posting a little more detail on the city, including character classes for Runners and Sandmen.

After traveling through the wilderness fleeing the ape lands, the players come upon a domed city in the valley before them.

I’ve been working on some revised character sheets for Apes Victorious. The ones in the book are a little small for campaign use, so I’ve made a letter sized version. I’ve also reorganized it a little, putting all of the combat stats in one location.

I’ve removed the equipment section, which I’m planning on putting onto another sheet.

I have two PDFs, one is the form-fillable version.

These are still works-in-progress, and I’m open to any suggestions.

This mutant beaver is 10′ long, with brown fur, and huge extended incisor teeth. Unlike their smaller relations, giant beavers are omnivorous, and will attack animals and people.

They make their home on rivers where they build massive wooden dams to create small lakes. They use the freshwater lakes as hunting grounds, where they attack anything coming near the water. If a beaver spots a victim, it will slap its tail against the water to alert its fellow beavers, and attack.

Giant beavers lumber awkwardly on land, but can glide easily through the water, propelled by their powerful tails. They can stay underwater for over 20 minutes.

Their primary form of attack is their powerful bite. If a victim is bitten, it will need to make a muscle check to free itself. If in the water, the beaver will attempt to submerge with his prey, to try to drown it. A muscle check will need to be made to avoid being submerged.

While submerged, the victim must make a resist trauma roll each round, or take 1d6 pts of damage.

The beaver can also use its powerful tail to hit a victim. In addition to 1d4 damage, the victim must save vs. Stun to avoid being incapacitated for 1d3 rounds.

PAX is a international organization of scientists and government officials who had believed that human civilization wouldn’t survive the Twentieth Century. They weren’t certain what the nature of the apocalypse would be, or even when it would happen, but they were determined to help humanity survive.
Their plan was to build a series of underground bases, stocked with the tools, equipment, and knowledge to rebuild the world. In each base, several teams of trained volunteers would be cryogenically preserved. When the base computer determined the conditions were right, a team would be awakened. Each base was given a greek letter designation (Gamma, Epsilon, Omicron, etc.). The players in this campaign would be assigned to PAX Gamma.
For reasons of security, each team would not be told where the bases were, or which one they would be placed in.
Pax Base
A PAX base consists of several spherical modules, each designed to resist terrible geological stresses. They each have their own individual atomic power sources, designed to last for millennia. They are connected by flexible corridors, designed to be self sealing if severed.
There are several modules, each with it’s own function:
Cryogenics: This is where the characters will wake up. There are up to thirty cryotubes here (it varies by base). They can wake up any of the others at any time.
Supply: Most of the food supplies & water processing equipment is here. There are also seeds and fertilizer for agriculture if needed.
Medical: With the advanced medicine here, an injured person can gain up 4 hp per day.
Science Labs: With the advanced computer tape libraries here, add -1 to any science rolls.
Vehicles & Heavy Engineering: This is the largest module. It contains several kinds of vehicle – sea, air, and land. They are all atomic powered.
Every base, once activated, sends out a automated radio signal. It can be detected several miles away.
PAX Alpha
The headquarters for the PAX Project. This base would be several times larger than the other bases, containing hundreds of people, and all the supplies, equipment, and information needed to restart a technological civilization.
PAX Mission Objectives:

This is a cleaned up and revised version of a file I’ve done previously.

I’ll be using the classes developed by David Baymiller at the blog The OSR Library. They include Soldier, Scout, and Scientist. I’ve modified the Soldier class slightly – the ability to identify Underdweller tech only applies to weapons in my version.

I’m also included another, more powerful version of the scientist class from K-Slacker at Mutants & Magic

I renamed K-Slacker’s version of the scientist class to Super-Scientist to distinguish the two.

I’ve also added a class of my own – the Engineer